I’ll admit it.  I recently became a subscriber to the world-famous magazine, Reader’s Digest.  No, I didn’t sign up because of the informative articles and touching stories from its heart-felt readers.  Nor did I sign up because of the hilarious jokes or thoughtful anecdotes woven into each issue.  These may all have been excellent reasons for others to subscribe, but not me.  I became a Reader’s Digest subscriber because I want to win a million dollars.

There, I said it.  Is that really so wrong?  I mean, think about it: o-n-e m-i-l-l-i-o-n d-ol-l-a-r-s!!!  And not only are you practically guaranteed a cash prize, but you also are given the opportunity to evaluate one of their many fine gift selections.  How can you go wrong?!?!?  My latest free gift offer was for: Looking After Your Body: An Owner’s Guide to Successful Aging, and boy, let me tell you, I can’t wait to get my hands on this gem!  Hey, I’m a guy in my 20s, don’t you think it’s about time to start thinking aboutsuccessful aging???

Now, I know what you’re thinking.  You’re thinking, “Come on, Scott!  Have you completely forgotten about the famous Mr. Ed McMahn and The Prize Patrol???  Since when has Reader’s Digest been famous about giving away large sums of money to complete strangers?  Surely Ed (don’t worry, it’s ok for anyone in America to call him Ed…it’s in the Constitution) is the king when it comes to this sort of thing!”  Well, I’ve watched the Super Bowl for countless years now, and not once have I seen The Prize Patrol‘s van even around the neighborhood, so let’s just say that I finally gave up on ‘ole McMahn…

But I can tell that Reader’s Digest is different!  They’re not like those other companies and here’s the single reason why: ‘they want ME to win…’  Not some nobody from halfway across the country, not the “nice” old lady down the street who vacuums her lawn and always retrieves her mail in nothing more than curlers and a pink flannel nightgown (not that I’m complaining), they want me to win!!!  I can tell this because, even before I received my first issue of Reader’s Digest, I received approximately 27 separate Official Verification Forms stating that I was painfully close to taking home the huge cash prize — all that remained was a little paperwork to close the deal…

I mean, come on!  They sent me a copy of the check that is ready and waiting!  How can I not try these guys?!?!?

I think the most convincing fact that they really do care, though, is that they were ready to renew my subscription before it even started!  That’s right, they don’t waste any time over there at Reader’s Digest, and I appreciate that.  If I’ve only got twenty-four more monthly issues left on my subscription, it’s reassuring to know that they’ve already got a bill in the mail so I can continue to receive my magazine two years down the road.  Oddly enough, it did take nearly three months to receive my first issue, so maybe I should’ve renewed it sooner.  I did, however, receive a stack of the last four issues that I’d missed one morning, so that was definitely a bonus.  Yeah, the breaking stories about the exciting election of 2000 were a little less exciting, considering that it had been over for several months, but the thought was still there… 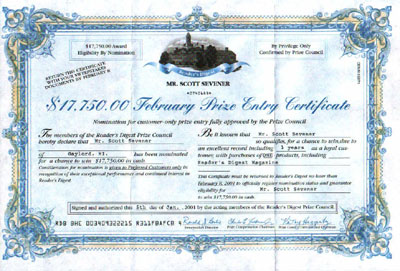 So what’s my point?  Subscribe to Reader’s Digest, and start writing your acceptance speech.  I recommend that it start something like this:

Did you enjoy this article?  Would you like to read one that actually is enjoyable?  Well, here’s one that I thought was really cool.  Motivational speaker Patrick Combs tells the story of when he deposited a junk mail check and the bank actually cleared it!